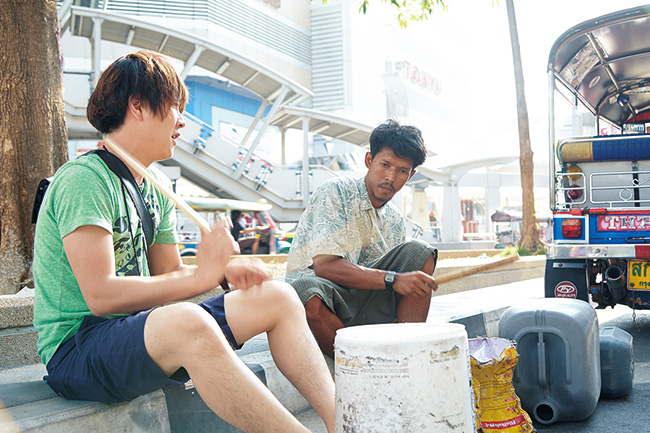 There is a word “Japanese common sense is not the common sense of the world. “Also in this project, there was a meeting with unimaginable people. The most impressive was encountered the man who was hit a buckets and plastic bottles in the street on the third day. Perhaps he is not a professional percussionist. But, Koura interested in his incomparable rhythm. So he offer the session to this man. That would have been unthinkable before. This is also a sign of his growth in Thailand.
Then, it was started Thailand vs Japan of percussion battle. After a while, “Where are you from? “Which came out when the man got breath. Koura answered “Japan “Then the man suddenly changed like a mad. “Tokyo?!” “No, Osaka,” “Tokyo?!!” “No, from Osaka,” “Tokyo?!!”… The crazy man was beating out a bucket and bowl even his stick broke. Finally, they hugged each other and crossed fists.
After a long moment, he still couldn’t understand why the man was excitement and screaming “Tokyo “Actually, he was determined that to hit the dram in the session in the night of the day. But, he had a many bunch of blisters on hands. Whether he can overcome this accident?
Nevertheless, what he was much more concerned with was that he would have been the percussion instrument by the man who heat up during a performance.

« Previous Post＃001
Project No.1 in Thailand
～Fly before you cogitate, to land of smile.〜 Next Post »＃003
Return in the first place to get back the original “Yoshiyuki Fujioka”