＃013
Mixed band, to formation The other side of period.

As a condition of vocalist, there were thing that are not negotiable to Fujioka. It’s that it is a Thai. Also he look ahead their band will active in Thailand. Rather, A world which is not seen yet, is going to be seen when sharing a common destiny with musician who is region, culture, the word different from us. Expectation of the unknown drove him.

However, his connection is not in Thailand. Genuinely, it was starting from scratch. He collects information on the Internet, following a network contacts such as Facebook every day. He doesn’t know when outcomes will come out to him. He doesn’t have a much of choice. He was continuing to fight the anxiety and impatience, one day, a turning point came. The thing when He visited the Thai music festival, which was held in Osaka city. He wants to take a contact directly with the musicians on stage. He persuade the security and sneaked into the dressing room with no appointment.
Then handed out business cards that were prepared for this day to musicians and authorized people, so he conveyed the feelings. But the reality is severely, people who show interest were few. It lost more choices. Fujioka left pressed, He randomly asked to people entering the field of view. Then, Thai students who participated as management volunteers said “to try to hit the acquaintance!” From there was born a new network of contacts from him and a Thai woman was reached. She is Nut. “This would probably be impossible. “ When he was about to give up at the end of summer, suddenly, unexpected hope of light came.

However, it cannot be assured that until listen to the voice. In some cases,Fujioka was thinking that the ruthless decision also. But, the anxiety was proved unfounded. The demo tape with singing voice of Nut were sent from Thailand that was more than expected. Fortunately She was thinking that want to more power to the activity as a musician. Now this is what we call WIN-WIN. The Journey to fined members began in May 2014, it came to end in November 2014.

However, It is not everything resolved in just formed a band, Fujioka is well aware of that. He taking active part as a professional musician, He has experienced the harshness and difficulty of creating music which move hearts of people. Then communication with nut only through the skype. He needs to fly to Thailand immediately. And listen to live singing voice, also necessary to deepen their ties. At the same time, they have to booking live house. And to do that it must be made a demo tape to appeal. Of course, as potential and color of the band can be seen. New task has been piling up in a moment.

First, let’s choosing the dates to fly to Thailand. Fujioka, Koura and Fujita have an own activities in Japan. It’s impossible to go at all to fit the schedules. So they should make a demo tape of source and try to recording in Thailand. Fujioka decided to go to Thailand in alone. The date is 30th March 2015. Before flight to Thailand, they are not afford to waste even one minute one second. They will check their own schedule, if they find the time to meet even a little, they gathered in studio. Composer Fujita is. Other two members put the idea. Three sound entanglement through repeated sessions. Evolving little by little. Fujioka say “When imagining when singing voice of Nut is fused it. I was irresistibly excited and I was consumed great anxiety at the same time.” It’s his unique feelings to know the benefit and risk of the creating songs. Then life-or-death of this song will become clear all in Thailand.30th March, Fujioka stood Japan with fate of his band. Also packed demo tape, live house list he wants to book, and the contacts of person who know the music scene in Thailand into a bag. 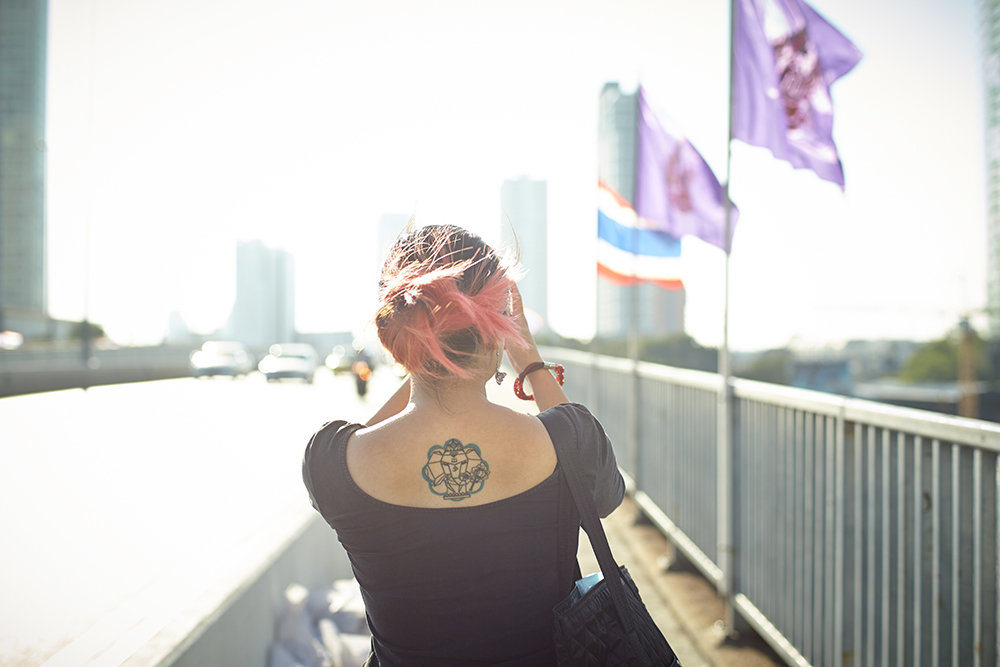